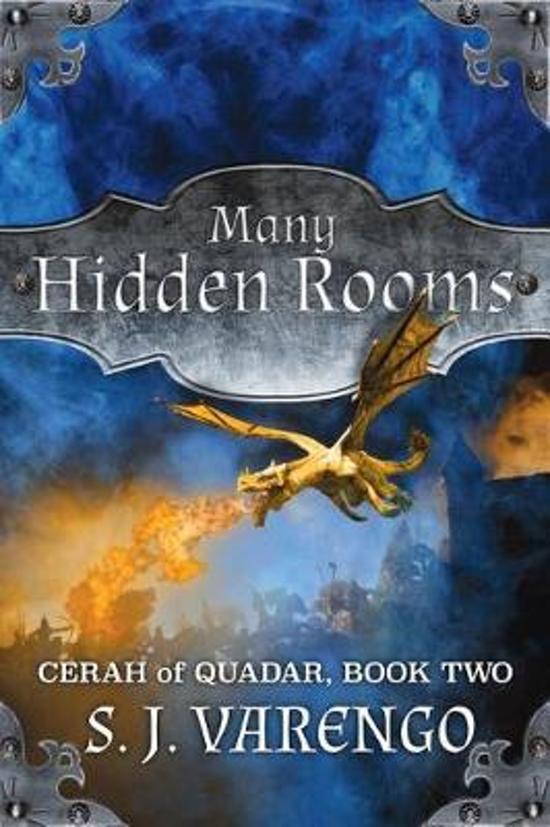 Those interests, plus his love of writing, have led to the creation of a series of short stories revolving around a recurring character he had created and played in many of these settings, the half-elven warrior maiden 'Ceylo Krinn'. Though inspired by the fantasy gaming tradition that spawned her, the author has developed her nature, history, and life far beyond those original boundaries into a fascinating case study of the dual nature of humanity; the darker, violent half versus the more gentle, emotional side of our being.

In the distant past of an alien world, a beautiful elven enchantress named Soltiad, her husband Andurant Krinn, and a frightened band of family members, flee the destruction of their home world by means of a magical portal. Transported to the wilderness of the Perennial Mountains in the Land of Niadelle, Soltiad goes into immediate labor and gives birth to a half-elven, half-human child who she names Ceylo, which means 'The Troubled Flower' in her native land.

The refugees soon discover that they cannot mix with the general population of Niadelle: On this world, the elves and the humans are bitter, mortal enemies and neither group would understand or tolerate the mixed marriages that were common among the Krinn. Instead, they setup their own small farming village in an isolated valley of the Mountains and name their new home 'Feldhall Vale'. However, tragedy falls upon them some eight years later when a group of mercenaries and slavers known as 'the Cleansers' attack and destroy the village.

All of the adults, including Soltiad and Andurant Krinn, are viciously put to the sword. The children are seized as treasure and sold into slavery. Ceylo, now separated from her younger brother Andur, is sold to a Surracean Family and shipped across the southern sea to the wilderness land of Iberia where she is forced into humiliating abuse and servitude at the hands of her captors. Yet, through all of this, the young girl dreams of the day when she can escape her bonds and find herself reunited with her long lost brother.

One day, Ceylo gets her chance at freedom. While visiting the desert city of Algeciras, she vanishes from the midst of a crowded marketplace, slips away from her 'family', and boards a trading vessel on route to a strange new land known as 'Niadelle'. For the next eight years, Ceylo searches throughout this beautiful country for her brother.

She trains as a mercenary warrior and learns the deadly art of dual blade attacks. She studies old documents and histories at every opportunity, always preparing herself for the inevitable day when she would stumble across the first real clue to his location. Then, finally, she remembers a name from her youth.

The evil army that had butchered her family had been chanting a name during their bloodlust. Surely, that name belonged to the evil man responsible for the murder of her family. When, while visiting a local tavern near the village of Laidlaw, Ceylo hears this name again, she leaps into action and the epic adventure of her life finally begins.


The name she hears in the tavern is 'Aganaar', and he is the leader of a group of warriors known as 'The Blade of Justice' Read more Read less. About the Author Ralph Stadig is a Connecticut author, poet, and software developer. No customer reviews. Share your thoughts with other customers. Write a customer review. Most helpful customer reviews on Amazon. May 20, - Published on Amazon. Verified Purchase.

I love this book- the characters are so real you can almost reach out and touch them, the plot is very well founded and fleshed out and the story line just fascinating! I highly recommend this book to one and all, young and old alike! March 30, - Published on Amazon. Really enjoyed this book. May 29, - Published on Amazon. The returns from desiliting, increase in area under the tank command with paddy and cotton crops are found to be beneficial.

It concludes that rehabilitation of small tanks should be considered a priority investment as it will not only enhance WS and financial benefits to local communities, but also augment river flows in the non-monsoon season. Kolusu, S. The El Nino event of climate anomalies and their impact on groundwater resources in East and Southern Africa. Over Southern Africa the most intense drought event in the historical record occurred, based on an analysis of the cross-scale areal intensity of surface water balance anomalies as represented by the standardised precipitation evapotranspiration index SPEI , with an estimated return period of at least years and a best estimate of years.

Climate risks are changing, and we estimate that anthropogenic warming only ignoring changes to other climate variables, e. These surface water balance deficits suppressed groundwater recharge, leading to a substantial groundwater storage decline indicated by both GRACE satellite and piezometric data in the Limpopo basin.

Writing the novel: WHY do we write?

Hecht, J. Hydropower dams of the Mekong river basin: a review of their hydrological impacts. Journal of Hydrology, In addition, tributary diversions for off-stream energy production are reducing downstream flows and augmenting them in recipient tributaries. To help manage tradeoffs between dam benefits hydropower, irrigation, flood control, domestic water supply, and navigation and their consequences for livelihoods and ecosystems, we review observed and projected impacts on river flows along both the Mekong mainstream and its tributaries.

We include the effects of diversions and inter-basin transfers, which prior reviews of flow alteration in the Mekong basin have largely neglected.

Finally, we strongly recommend that dam impact studies consider hydrological alteration in conjunction with fish passage barriers, geomorphic changes and other contemporaneous stressors. Walker, D. Insights from a multi-method recharge estimation comparison study. We investigated the additional value that can be gained from multi-method recharge studies through insights into hydrogeological understanding, in addition to characterizing uncertainty.

Nine separate groundwater recharge estimation methods, with a total of 17 variations, were applied at a shallow aquifer in northwest Ethiopia in the context of the potential for shallow groundwater resource development. Critical assessment indicated that the results depended on what the recharge represents actual, potential, minimum recharge or change in aquifer storage , and spatial and temporal scales, as well as uncertainties from application of each method.

This study demonstrates that even when assumptions behind methods are violated, as they often are to some degree especially when data are limited, valuable insights into the hydrogeological system can be gained from application of multiple methods. Dillon, P. Sixty years of global progress in managed aquifer recharge. Hydrogeology Journal, 27 1 This paper is the first known attempt to quantify the volume of MAR at global scale, and to illustrate the advancement of all the major types of MAR and relate these to research and regulatory advancements.

Faced with changing climate and rising intensity of climate extremes, MAR is an increasingly important water management strategy, alongside demand management, to maintain, enhance and secure stressed groundwater systems and to protect and improve water quality. During this time, scientific researchon hydraulic design of facilities, tracer studies, managing clogging, recovery efficiency and water quality changes in aquifershas underpinned practical improvements in MAR and has had broader benefits in hydrogeology.

Recharge wells have greatly accelerated recharge, particularly in urban areas and for mine water management. In recent years, research into governance, operating practices, reliability, economics, risk assessment and public acceptance of MAR has been undertaken. Mark, Y. Safety assessment on microbial and heavy metal concentration in clarias gariepinus African catfish cultured in treated wastewater pond in Kumasi, Ghana. Environmental Technology, 40 3 Treated wastewater-fed pond WFP was used in the culture of the fish with a non-wastewater fed pond NWFP , fed with ground and rain water as control.

Pond water, sediments and fish tissue gill, liver, gut and skin samples from both sources were analyzed for pathogens and heavy metal levels. Escherichia coli populations in the sediments and water from the WFP exceeded the maximum permissible limit by 23 log units as expected. There were significantly higher heavy metal concentrations in gill and liver than the muscle.

Even though iron recorded the highest concentrations in fish tissue, the concentrations 0. This study reviewed the status of natural resources and the driving forces for change, as well as past and ongoing approaches in natural resource management at the watershed scale in Ethiopia. First, we reviewed established environmental policy tools and the legal and policy framework, and determined whether innovative financing mechanisms are working in other areas with a similar context.

We undertook stakeholder analyses and mapping to identify key stakeholders, and to assess their possible roles in the implementation of a sustainable financing mechanism for watershed rehabilitation. We also determined whether opportunities exist for financing mechanisms involving hydropower and urban water supply in payments for ecosystem services PES , and the global community in the Clean Development Mechanism CDM in the context of the Bale Eco-region. The study identified major constraints to designing an appropriate financing mechanism.

Finally, the study drew important conclusions and key policy implications that are relevant for Ethiopia and perhaps other areas in a similar context. Shah, Manisha; Sakthivadivel, Ramaswamy. International Journal of Engineering and Technology, 7 4 Tank institutions declined and what remained of these irrigation tanks evolved into mostly percolation tanks. In , in the face one the biggest droughts affecting the state, Tamil Nadu government announced Kudimaramathu scheme to revive the age-old practice of community participation in tank repair and management.

The program has tried to bring farmers together to form WUAs to take up activities for tank rehabilitation but like many other programs in the country, these institutions appear to exist only on paper with the program being driven primarily by local PWD officers and contractors. This paper brings insights from thirty tanks under rehabilitation in seven districts of the state which were taken up under this scheme and were studied through case study approach.